The richness of information contained in natural language cannot be fully captured and analyzed using traditional graph-based network methods or distributional frameworks. On one hand, natural language is recursive, allowing for concepts constructed from other concepts as well as statements about statements and, on the other hand, it can express n-ary relationships.

While a graph is based on a set of vertices and a set of edges describing dyadic connections, a hypergraph generalizes such structure by allowing n-ary connections.

To illustrate, let us assume that (a b c) specifies a hyperedge connecting a, b and c. Since SH hyperedges are ordered, (a b c) is not the same as (c b a). Saying that hyperedges can be recursive means that they can connect both atomic and non-atomic hyperedges. For example:

The above hyperedge connects the entities a, b, c and (d e f). (d e f) is itself a hyperedge, connecting the entitied d, e and f.

Readers who are familiar with Lisp will likely have noticed that hyperedges are isomophic to S-expressions. This is not purely accidental. Lisp is very close to λ-calculus, a formal and minimalistic model of computation that is based on function abstraction and application. The first item of an s-expression specifics a function, the following ones its arguments. One can think of a function as an association between objects. Although hyperedges do not specify computations, connectors are similar to functions at a very abstract level, in that they define associations. The concepts of “race to space” and “race in space” are both associated to the concepts “race” and “space”, but the combination of these two concepts yields different meaning by application of either the connector “in” or “to”. 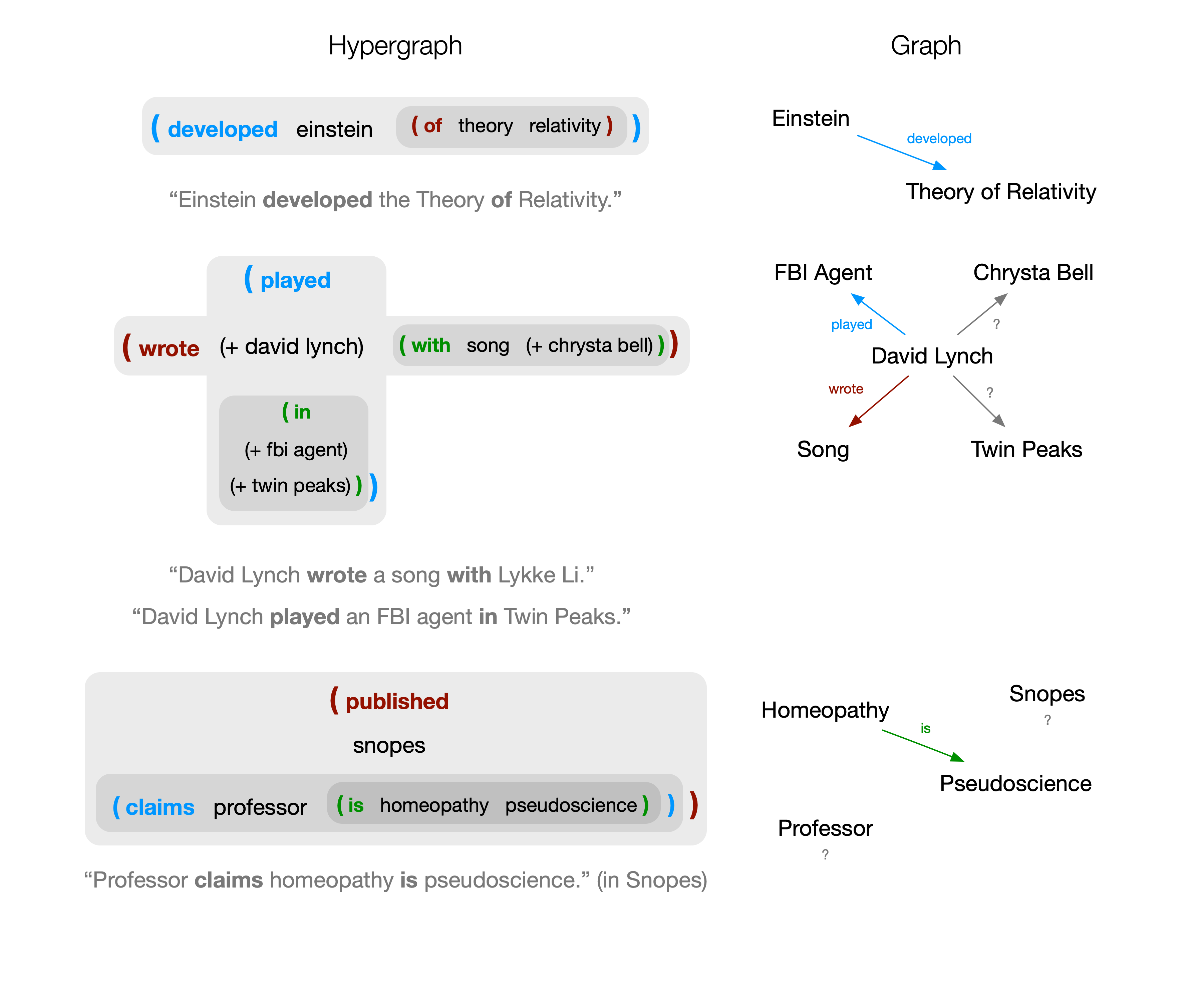 Knowledge agents are programs that manipulate hypergraphs in some way. They can be introspective, working only on the current contents of the hypergraph to derive new knowledge. For example, the taxonomy agent infers simple taxonomies from concepts. It can infer that ‘black cat’ is a type of ‘cat’ or that ‘city of Berlin’ is a type of ‘city’.

It produces new hyperedges such as:

Certain agents use outside sources to introduce knowledge into hypergraphs. For example, the txt_parser agent receives as input a simple text file and converters each sentence that it detects in it into an hyperedge.

You can find the full list of agents that are distributed with Graphbrain here: